TVMAS is a bridge for business development between all continents with LATAM and the U.S. Hispanic market.

TVMAS Magazine is a trade publication in the television, and audiovisual content sector for TV and multiple platforms, based in Miami and working with specialized journalists located in several Latin American countries, Europe, Africa and Asia.

Was created by journalist and producer Amanda Ospina in Buenos Aires, Argentina in June 1999. From this date this publication circulates and participates in various world markets and fairs such as NATPE in United States; NAB in United States; NCTA in United States; ANDINA LINK in Cartagena, Colombia; MIPTV in Cannes, France; CONVERGENCIASHOW in Mexico City, Mexico; THE L. A. SCREENINGS in Los Angeles, California; DISCOP in Dubai, UAE; THE BUSAN CONTENTS MARKET in Busan, South Korea; TEPAL in Panama, The Republic of Panama; JORNADAS DE CABLE in Buenos Aires, Argentina; MIPCOM in Cannes, France; ASIAN TELEVISION FORUM in Singapore; PUNTA SHOW in Punta del Este, Uruguay and CHILE MEDIA SHOW in Santiago, Chile among others.

OUR MISSION: To deliver the best information as a vehicle for the development of the audiovisual business sector in several trade shows as a valuable tool for decision makers in the audiovisual content industry, in Open TV, Pay TV and multiplatforms. We work to support the distribution of ideas, concepts, formats and content. 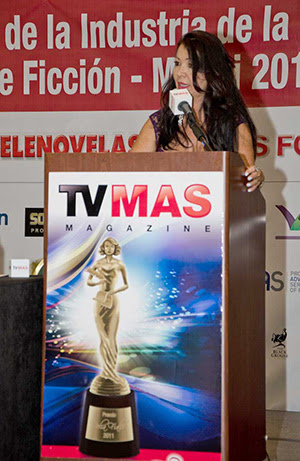 OTHER PRODUCTS AND SERVICES: TVMAS organized under the leadership of its founder and director Amanda Ospina, The World Summit of the Telenovela and Fiction Series Industry. This event is unique in the world. The summit has been held in the United States, Europe and Latin America. ONLY TELENOVELAS FICTION & FORMATS is published in English once a year, to analyze trends, developments and the distribution of these contents throughout the world.