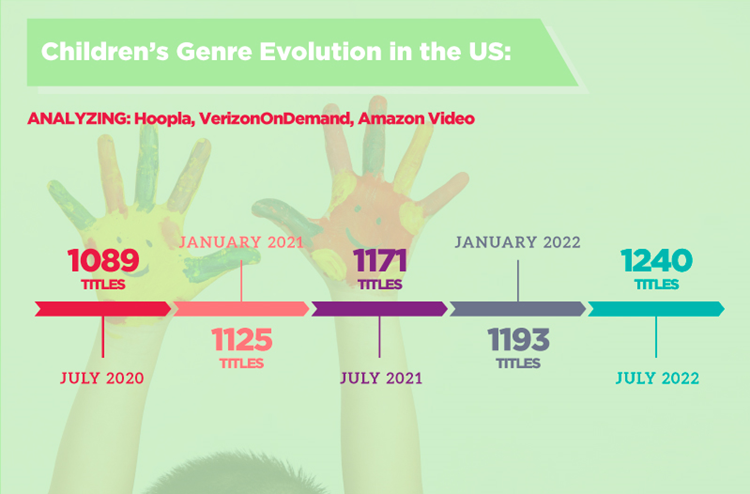 The Kidscreen, a recognized event that brings together the children’s entertainment industry sector and BB Media, an important company that knows the current situation of the children’s streaming market, is present and offers comprehensive analysis focused on streaming availability and content metadata.

After monitoring +3,300 streaming services, BB Media found that “PAW Patrol”, “Adventures with Dora” and “Peppa Pig” are the most distributed series worldwide! And HOOPLA, is the streaming service with the most children’s content in the US.

BB Media analysts identified that the Top 3 platforms with the largest kids’ content catalog in The US are Hoopla (with 574 titles), followed by VerizonOnDemand (399 titles) and Amazon Video (376 titles). Hoopla and VerizonOnDemand are characterized by having more children’s films than series, while Amazon Video has more children’s series than films.  At a country level the number of films and kids’ series is similar, thus having 1,941 titles available for children.

The US currently ranks as the country with the most children content globally, followed closely by the United Kingdom, Canada, Germany, Australia and Brazil. The most popular titles for kids in United States are “Gravity Falls”, “Batman: The Animated Series” and “Young Justice”. All these series have been released a while ago, yet they still captivate this audience.

Laura Ghisiglieri, Global Development & Marketing Director, will be attending the event on behalf of BB Media, global Data Science company specialized in Media and Entertainment for more than 35 years.

Laura will present at the event one of the company’s latest releases, the Multiscreens+  service, which lays out an analysis of the content offer of streaming platforms. Special emphasis will be placed on the report Multiscreens+ | Content Pulse, which monitors the content available on streaming services and its standardized metadata. Multiscreens+ has inspired large amounts of clients in the UK, India, USA, Spain and even multiple Southeast Asian countries, with global data on content offerings on +3,300 platforms available in +240 countries.