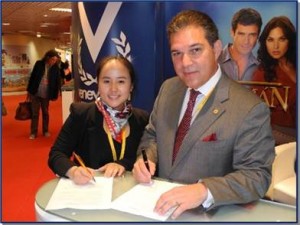 This momentous agreement was signed during the international content market MIPTV,

Venevision International, a global entertainment company of the Cisneros Group of Companies, and Zhejiang Huace Film & TV Company, one of the largest private producers and distributors of television series in China, signed a deal to co-produce and mutually distribute a telenovela that will be completed in the majestic Asian country during this year 2012.

This momentous agreement was signed during MIPTV 2012, the international content market that continues until April 4th at the Palais des Festivals in the magnificent city of Cannes, France, where more than 11,500 participants from more than 100 countries around the world have come together.

“This alliance with Zhejiang Huace Film fortifies our presence in China, where Venevision International, lead by the Cisneros Group of Companies, has made inroads for some years now, stretching our business ties in this important region that is Asia,” emphasized Manuel Perez, Vice President & CFO of Venevision International, who manages the company’s operations from its headquarters in Miami, Florida.

“This significant agreement is the result of the business integrity for which we are known in this region, established by our Chairman of the Cisneros Group of Companies, Gustavo Cisneros,” added Perez, who heads the company’s commercialization team at MIPTV 2012.

In addition to exploring new business ventures, Venevision International came to MIPTV 2012 armed with a vast programming proposal that consists of an array of passionate telenovelas, such as “El Talisman” [The Talisman], “Corazon Apasionado” [Passions of the Heart] and “Natalia de Mar” [Natalia], as well as beauty pageants, a diverse selection of formats, educational and comical series, reality clips, and captivating documentaries.