Telecommunications Reform in Mexico, was the central theme of the convention 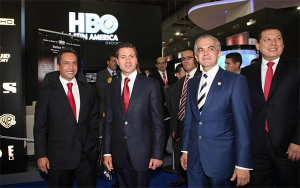 With 5000 square meters designated for the exhibition area, and with over 300 affiliates present, from May 29 to 31 at the Centro Banamex in Mexico City, took place the 2013 edition of the Expo CANITEC where TVMAS was present. With a speech by the president of Mexico, Enrique Peña Nieto, Expo officially started on May the 29th, where the Mexican citizen stressed the importance of implementing the so-called “digital switchover”, which would imply that every television in the country are able to receive a digital signal. He also said that cable TV and service managed to triple to 47% of Mexicans, with convergence of 7.3% of landlines and 14% of broadband subscribers.

Enrique Yamuni, Megacable’s CEO, received recognition from President Peña Nieto for their contributions to the telecommunications industry. Meanwhile, Alejandro Puente, president of CANITEC, received during the feast of Televisa Networks celebrated the first day of the Expo, an award for his 10 years of work on behalf of the industry, from the president of Grupo Televisa, Emilio Azcarraga Jean, along with the executive Pepe Baston.

With an average attendance over the three days, the most important pay TV channels, took advantage to showcase their innovations for the rest of the year. Although it is important to note the reluctance of some channels, as several of its executives or representatives, were not in appearance, or present a clear offer.

Likewise, it also highlighted the work of companies like Televisa Networks, Discovery, Viacom, Arris and FOX, to name a few, where its directors were pending on every detail and attending to customers and the communications media.