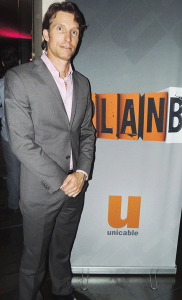 Televisa Networks through its Unicable signal, presented in Mexico City, Plan B, a program led by the musical group OV7 and under the production Yordi Rosado and Manolo Fernandez , which began broadcasting on August 28 at 8:30 p.m., in Europe through the channel of El Canal de las Estrellas on 5 September and in Latin America on September 6.

In an interview with TVMAS, Bruce Boren , VP of Televisa Networks, emphasized the importance of nurturing the channels of pay TV with self-productions, as he says, ‘ the growth we have had in recent years requires to present more and better contents.’

“We are pleased to produce Plan B for Unicable, entertainment program which adds to the channel’s catalog in prime time. The Televisa Networks signal continue to grow internationally, presenting increasingly more and better proposals that strengthen our signals as Unicable, TeleHit, Ritmonson, Distrito Comedia, which is one of our top three channels and we have to expand it. Televisa ‘s comedy works very well and we have the internal talent to do it.”

Boren noted that the telenovelas are still his cover letter and international success, including on pay TV, “The tlnovelas channel, is the most successful we have in global pay TV, Televisa’s telenovelas are successful, we schedule six telenovelas daily and classical productions are a big hit and we like the idea of ​​putting on classics, I think it has to be a one classic cycle per year because the public asks. With Colorina we had to work hard over the issue to re-acquiring the rights and we did with great with audience results” concluded the executive.

Significantly, Televisa Networks recently launched two Premium channels. Also, they are preparing to launch the UFC Latino America signal, which will be seen on a pan-regional level in the last quarter of the year.