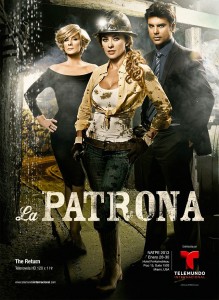 The successful production of Telemundo premiered in Honduras last September 2, in the 8pm schedule on Channel 5, adding to the more than 25 countries where it has been placed among the most watched programs, which stands out Argentina, Bolivia, Colombia , Ecuador, Spain, Greece, Hungary, Indonesia, Mexico, Nicaragua, Panama and Venezuela, among others.

La Patrona successfully climbed the ratings in the United States, whose grand finale obtained an audience of 1.45 million viewers. In turn, averaged over one million adults in the 18-49 band.

The story of La Patrona chronicles the life patron of Gabriela Suarez (Aracely Arambula), the only woman working in the mines of San Pedro del Oro and the turn that her life takes when she falls for Alejandro Beltran (Jorge Luis Pila), son of Antonia Guerra (Christian Bach), the most feared woman of the village. This love suffers the consequences from Antonia’s ambition. Gabriela is unfairly isolated, tortured and humiliated, escapes and believe dead. Then returns converted as Veronica Dantes, “La Patrona” to take revenge against those who destroyed her life.