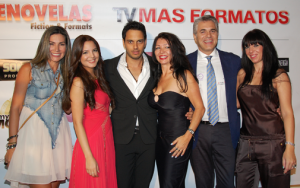 The World Summit of the Telenovela and Fiction Series Industry was profiled with special cover on NEXOS magazine circulating in American Airlines flights in Latin America. Below, is the published article.

Telenovelas is the television genre in Spanish and Portuguese of most importance to the entire Latin American audience. They are also the entertainment industry ‘s most successful export and distribution in Eastern Europe, Asia and throughout the African continent.

Therefore, this leads to pooling efforts and ideas during the World Summit of the Telenovela and Fiction Series Industry held annually .

This influence is so strong, that it is not surprising that telenovelas in Brazil, a country with over 192 million daily viewers, have played an important role in policy discussion forums and exposing the country’s social problems. So much power exerts the  transmission of telenovelas in this country, that now enable the delay of televised football games and even cause meetings to be advanced to see them.

This authentic literary genre of Latin American popular culture, is characteristic for obvious social implications such as the differences between rich and poor, rural life and the daily city life, and the difficulties to ascend in society, to obtain wealth, happiness and love. However, these love stories broadcast on the small screen captivate and impassion viewers in the most remote places of the world turning our Latin American gallants and actresses in international stars, and in turn, marketing the tourism of our countries.

Latin American telenovelas are also literary export products, since format rights are sold for local adaptation in other countries, generating even more profits. The Latin American countries that export the most novels and formats to the world are: Mexico, Brazil, Colombia, Venezuela, Chile and Argentina.

In Mexico, telenovelas are produced by Televisa and broadcast primarily in the United States on the Univision network. With this availability and distribution, success is almost guaranteed. The themes of telenovelas produced by Televisa are universal: love, betrayal, suicide, jealousy, seduction, violence, revenge, passion, oppression, sexism, corruption and incest. These telenovelas, which were mainly written by veteran screenwriter Delia Fiallo, were characterized by personages who suffer emotional problems, anxieties and highly improbable situations, full of coincidences, twists in its episodes and solemn situations contrasted with extravagant lives. In Russia, the Mexican telenovela Los ricos tambien lloran achieved its acceptance by the public, as two thirds of the Moscow population identifies as poor.

Brazilian telenovelas, produced originally in Portuguese, have gained acceptance in many Spanish-speaking audiences. The topics covered in these telenovelas play an important role in the public’s acceptance. The main topics are history, social class differences, land and culture. The Globo TV network also has a Research and Analysis Department that performs analysis of audience preferences, where scripts are continually reviewed and adjusted for each new episode. As an example, the telenovela La Esclava Isaura was shown in Cuba and Poland, and aired twice in China in 1980 and in 1983. The story of Rei do Gado is set in the XIX century during the war between landlords and tenants and achieved high ratings and acceptance by all these varied audiences.

In Brazil, the telenovelas began to change its content during the seventies, when its executive producers and marketing experts realized that the Brazilian audience did not want to torture themselves, but to be entertained watching television. It was then they converted the six o’clock novel to “most mildest novel”, at seven in the evening “most comic novel” at eight in the evening “most general themes and classics” and at ten in the evening, for older audience by offering “most alternative themes or cultural contents.” Hence, while in Brazil the telenovela style is associated mainly for their schedule, in Mexico, the telenovela is defined by the producer which personalizes the telenovela according to his style and usually does not alter the established programming schedules in order to guarantee a constant tuning.

In Colombia, the success of the telenovela Yo soy Betty la Fea became a phenomenon, being exported worldwide including China and then selling the format to the United States to adapt to English and to Mexico to adapt with its peculiarities in Spanish . Yo soy Betty la Fea is the story of woman intelligent, idealistic and shy that she was unsightly. The heroine became the symbol of innocence corrupted by the world’s women, thus obtaining its highest acceptance. The success of this telenovela is attributed to its realism.

Between days 5-7 of last November in Miami celebrated the Tenth Summit of the Telenovela and Fiction Series Industry where 18 countries participated with the most important industry representatives to encourage the global sector.

The main objective of the summit is to promote and foster partnerships for the development of these products and do updates on the latest trends in creation, production, scheduling, distribution and business in order to make better use of national and international markets. The centerpiece of the tenth edition was: “Changes in business models and transformation in the value chain, the profitability of fiction across multiple platforms and everything related to a business in boom.”

As leading figures of the telenovela, attended Venezuelan actress Gabriela Spanic and Cuban writer Delia Fiallo, and other industry personalities and twenty speakers, among whom I was honored to be invited.

I presented a lecture on the empirical reason of Telenovelas as a literary phenomenon which was favorably received. Ultimately, telenovelas are the genre that unites us.