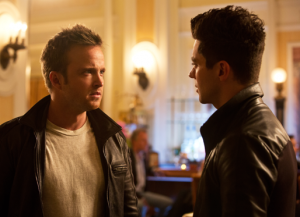 Based on the racing video game franchise the most successful of all time, which sold over 140 million copies, Need for Speed, the film will hit theaters in the spring of 2014. The film features the participation of TV star Aaron Paul, who is known for his role on the hit Emmy-winning series, Breaking Bad, who will be joined by actors Michael Keaton and Dakota Johnson. In the film, will play an ex-con who seeks revenge against the man who charged him in a crime he did not commit.

The film revolves around Tobey Marshall (Aaron Paul), a mechanic that competes with high-powered cars on an unauthorized street racing circuit. In their struggle to keep the family shop afloat, Tobey reluctantly is associated with the wealthy and arrogant former NASCAR driver Dino Brewster (Dominic Cooper). But just when Tobey is to close a big sale with car broker Julia Bonet (Imogen Poots) that could save his workshop, a disastrous race allows Dino to set a trap and frame him for a crime he did not commit, and for which Tobey is sent to prison while Dino business continues to expand westward.