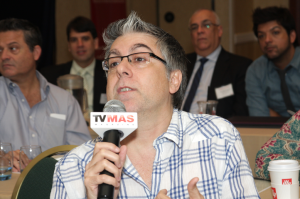 MIGRE is an association of more than 100 prominent authors of Argentine television and film recognized in the international market, who released their Master Class cycle, advocacy, training, professional services and counsel for authors and  the Argentine and internationals audiovisual industry.

It also announces the opening of registration for the contest “Creadores de Historias” (Story Creators), that will distinguish the best story for telenovela, comedy, miniseries or unitary and Child -juvenile series. The prize will be the inclusion of the story and its author in the 2014 catalog and cash amounts. The jury will be composed of the coordinators of the Audiovisual Authors Association MIGRE. Registration will close on 11/15/13.

The objective of MIGRE is to promote the defense and copyright protection of the author and the realization, development and dissemination of fiction works and documentaries content created by Argentine authors at home and abroad. Its slogan “A copyright is a human right”. The board is composed of Marcelo Camaño, Marta Betoldi, Paul Lago, Susana Cardozo and Ana Montes. www.asociacionmigre.com.ar