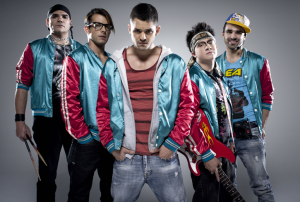 Due to the large acceptance of Cumbia Ninja Latin America, a FOX International Channels Latin America production, the company confirms that a new season will begin filming next year in Colombia and preserve the unique and novel components that made it a success where Latino urban music has a leading role.

Additionally, Cumbia Ninja now exceeds 36 million views on his YouTube channelwww.youtube.com/user/cumbianinja, has more than 65,000 followers on Twitter @cumbianinja and FOX and Sony just released the first album of the series available in all of Latin America through iTunes, Deezer and Spotify.

Created and written by Argentines Andrew Gelós, Martin Preusche, Natacha Caravia and Luis Langlemey, Kdabraseries creators; Cumbia Ninja has the direction of the Colombian Felipe Martinez (Bluff, Kdabra) and Riccardo Gabrielli (La Lectora, Tiempo Final). The musical compositions of all the original themes present in the series are the work of Puerto Rican Master Chris, while the lyrics are by Andrew Gelós.