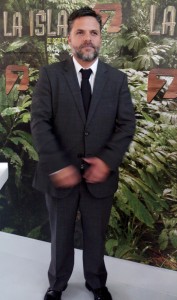 The reality in its second season is leading Azteca’s Mexican television audience, comes to an end on December 12 with great results in closing audience and causing controversy in social networks. TVMAS spoke with Ricardo Coeto, broadcast producer, about the success of the reality, and their upcoming projects inAzteca.

“Its impressive results this season showed us, that the audience is paying us with their loyalty, we are leaders in the timetable with such a robust program in social networks and digital platforms have caused controversy with over 500 thousand followers. Now the challenge will be next season, we have prepared surprises to not to disappoint our audience and keep showing a new product,” said the producer.

The format has already begun its distribution and international sales will continue with a third season next year,” the stakes for Azteca remains adventure realitys, we want to fill the bar of Azteca 7 with innovative productions. 2014 will be a difficult year, because of the World Cup, but we’ll bet for formats and original productions, and prepared El Hormiguero, a very successful format of Spain we hope we do very well in its Mexican version. Casting began in January of the third season of La Isla and surprises with new reality shows that will strengthen the prime time of the channel,” concluded Ricardo Coeto.

With 18 participants divided into three teams, La Isla tests survival, having as scenarios the sea and the jungle of Dominican Republic, under extreme weather conditions and living between Playa Alta, Media and Playa Baja. Competitors that still survive will continue individual battles, thus leaving two finalists who will compete in the grand finale of reality, for the win and the prize of 2 million pesos.