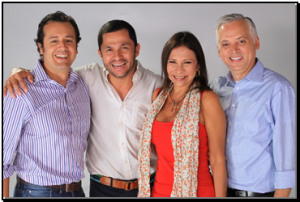 Quintero, creative television producer and nominated for the International Emmy Award, joins the Colombian writer Andrés López López and successful Venezuelan author Ibéyise Pacheco for the adaptation of the book “Sangre en el Divan” for the production of a series of 60 episodes that will held in the city of Miami and on location in South Florida.

The original work of Ibéyise Pacheco narrates the case of deceased Venezuelan psychiatrist Edmundo Chirinos, who served a prison sentence for murder. The original work has dramatic testimonies of victims and the prosecution files.

“We have brought together leading experts, creating a majestic creative team, each member contributing their skills to produce a captivating TV series that will surely be liked by television audiences,” said Juan Carlos Sosa, Executive Vice President of Operations Venevision Studios. “Marlon brings a successful track record to contribute to the conceptualization and development of this complex story.”