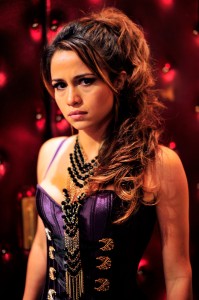 The moving story of courage and perseverance, ‘Brave Woman’, written by Glória Perez (‘The Clone’) and presented by Globo during Natpe, was licensed to Uruguay (Teledoce) Chile (Canal 13), Angola (TPA1), and Mozambique (STV). The two Latin American channels are old partners of the Brazilian broadcaster. Teledoce was the first to place its bets on the quality of Brazilian telenovelas, licensing ‘O Bem Amado’, in 1973, and since then has become one of Globo’s biggest partners, exhibiting the best productions from the Brazilian broadcaster. Canal 13 is one of the biggest TV networks in Chile, with successes from Globo in its programming.

Headquartered in Luanda, TPA is Angola’s public TV and the country’s main broadcaster. The channel has been reaffirming its partnership with Globo with each new licensing. STV, launched in 2002, which has the biggest audiences of Mozambique, has also been placing its bets on Brazilian telenovelas for years.

‘Brave Woman’ tells the saga of the combative Morena (Nanda Costa, ‘Seize the Day’), a beautiful woman of spontaneous sensuality and great inner strength. The young woman receives a proposal for her to work in Turkey, and upon arrival in the country, she realizes that she was tricked and winds up a victim of an international human trafficking gang. To escape from this misfortune without putting her family’s safety at risk, she must fight an arduous battle in which her freedom and her love are at stake. And in this fight, she will count on help from police officer Heloisa (Giovanna Antonelli, ‘The Clone’).

Like other telenovelas written by Glória Perez, ‘Brave Woman’ raises a social issue, which is human trafficking, but presents, as a backdrop, a story of love between Morena and Theo (Rodrigo Lombardi, ‘The Illusionist’), captain of Army’s cavalry. The two confront the most difficult obstacles to live out this great love.

‘Brave Woman’ has a cast of great talents, such as Claudia Raia (‘Passione’), Flávia Alessandra (‘Soul Mate’), and Carolina Dieckmann (‘Snakes and Lizards’), and promises to conquer more audiences around the world.