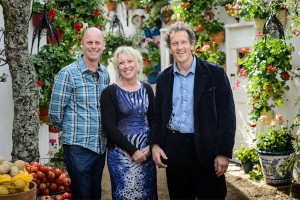 The activity of the distributor All3Media International in Central and Eastern Europe reveals the successful work being done by general management and its sales team.

They have just announced the sale of its gardening shows a classic brand of BBC Gardener’s World, which recently extended its sales to 25 new territories.

Jolanta Jasiene, procurement Manager of LNK Lithuania, commented: “I decided to give ‘Gardener’s World’ a chance in our TV1 channel on Saturdays at 13:00 hours, and I am very happy that this experiment has had an average share of 4.4 % in 2014 and 4.6% this year (the annual quota of TV1 is 3.4%). I’m sure gardening programs continue to grow in Lithuania.”

Among the broadcasters who are having great success with Gardener’s World include HRT Croatia, AMC Networks in Hungary; Spektrum Home in Czech Republic and Slovakia; NC + through Domo + in Poland and Russian Report for several CIS countries, including Armenia, Georgia, Moldova, Kyrgyzstan and Kazakhstan.

Domo + of Poland and Lithuania’s LNK have just licensed one more  block more thab one year, while Danish TV2, TOPTV of New Zealand, TV4 of Sweden and XYZ Australia also acquired the brand.

Additionally, Love Your Garden also is thriving in the region, and the fifth season was licensed by LNK Lithuania. The show also has a new license with RTL in Germany, as well as continuous licenses in Denmark (TV2), Ireland (UTV), Living Channel New Zealand and Foxtel Australia.

The distributor also assured new sales for Love for Sale with Rupert Everett, a two-parts documentary in which the actor has a personal twist on “the oldest profession in the world”. Recently awarded as “Documentary Presenter of the Year” for Rupert Everett in the Grierson 2014: The British Documentary Awards, “Love for Sale With Rupert Everett” was sold in Italy (CDI for Ceilo), Poland (TVN), Sweden (TV4), Australia (SBS) and Norway (SBS).