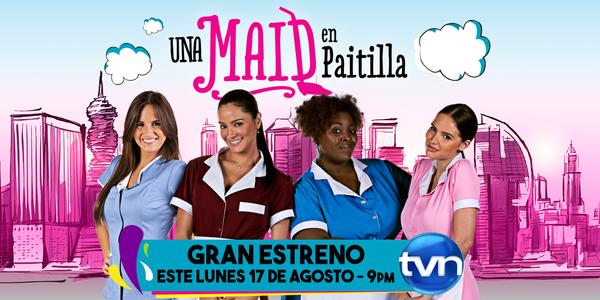 Monday, August 17 at 8 p.m. TVN Panama will release the romantic comedy Una maid en Paitilla, (A Maid in Paitilla) directed by Argentine Marcelo Suárez (La Lola/Telefe, Los Exitosos Perez (The Successful Perez/Televisa), belonging to DOAT, (Argentina Association of Directors of audiovisual works for Television). With this fiction of 40 half hour chapters, the channel returns to bet on serials local production, after five years.

Shooting lasted 10 weeks, in 12 real locations, including the 3 houses of the leading families. The realization was in charge of Panamanian WP Windmill Productions film producer company, which provided the HD technology.

“In Panama doesn’t exits a tradition of actors for television, but they are theater actors working on entertainment programs sketches or small fictions. Fiction is not developed as an industry. For this reason, it was a challenge to work with actors from scratch. We implemented an acting training workshop for TV during a month and a half and the experience was very positive. If it works as they expect, an important and interesting door for local development can be opened” said Suarez, who worked in Panama City, from April to August 7. Currently continues supervising the post-production from Buenos Aires.

The story about the group of maids seeks to highlight how valuable is the work of these women in the home, on a plot of comedy, love and overcoming. It is written by Colombian Paola Cazares (Infiltrados).