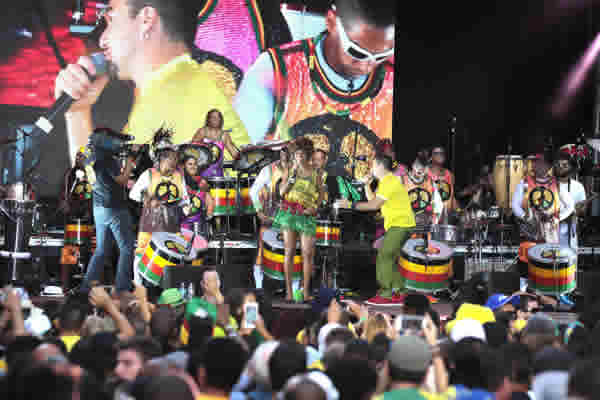 New York once again welcomed BR Day with open arms. On Sunday, September 6th, the crowd gathered at Sixth Avenue to praise the Brazilian “The GreenYellow Mood”. The event was presented by Brazilian actor Bruno Gagliasso, who stars in the Telenovela ‘Precious Pearl’, as Franz Hauser, which just premiered at Telemundo. With five hours of live music, the show was a colossal celebration with performances by Paula Fernandes, Fábio Jr., Durval Lelys and Olodum.

A day before the party, on Saturday, Globo prepared a surprise for the city: everyone walking through bustling Times Square was treated to an energetic surprise show by Brazilian percussion group Olodum. Members of the band, one of the headline acts of BR Day NY, were dressed in the colors of Brazil and proved that the its iconic beat which inspires a nation- brings its magic wherever Olodum may go. The surprise performance was a preview of Olodum’s BR Day spectacle, and typical of Olodum’s classic style, as a group that has performed with stars like Paul Simon and Michael Jackson.

And to warm up the pre-party atmosphere with the Brazilian community living in the United States, Globo promoted a contest on its social media and brought the winner and a guest as VIPs to BR Day NY. To compete, fans posted photos on Globo’s official page showing their ‘greenyellow’ side. The most creative photographer won a trip to New York, which included airfare and accommodations, and access to the backstage pass where they met the artists in person. Fans shared a lot of content throughout the event with the hashtag #brdayny, with which the public could share photos and videos of the show.

On Sunday, the party went international and was viewed in Brazil and around the world. Globo broadcasted the BR Day NY live via online streaming on GShow.com Globo’s entertainment portal.

BR Day NY also had special space in exclusive programs for subscribers of Globo’s international channel in the Americas. News show ‘Boletim Globo Notícia Americas’ covered the preparations for the party, and on sunday, journalist Mila Burns went on the air with reports broadcasted from Sixth Avenue. Variety show ‘Planeta Brasil’ interviewed fans who were watching the event, as well as on the backstage, to show the adrenaline and excitement of the talents that were part of this year’s party.

Formerly known as “Brazilian Day” this iconic event began in 1984 on 46th Street, also known as ‘Little Brazil,’ in celebration of Brazil’s Independence Day. The party grew bigger every year and now runs across Sixth Avenue from 42nd Street to Central Park. In 2014, it gained a new brand, and is now called BR Day New York. Accompanied by the tagline ‘The Greenyellow Mood,’ it celebrates the tenacity of Brazilians who travel to different parts of the U.S. to join the party, and salutes both Americans and others from around the world who relate to the Brazilian zest. BR Day has already featured Brazilian superstars such as Timbalada, Skank, Jorge Ben Jor, Lulu Santos, Marcelo D2, Alcione, Elba Ramalho, Zeca Pagodinho, and Ivete Sangalo. 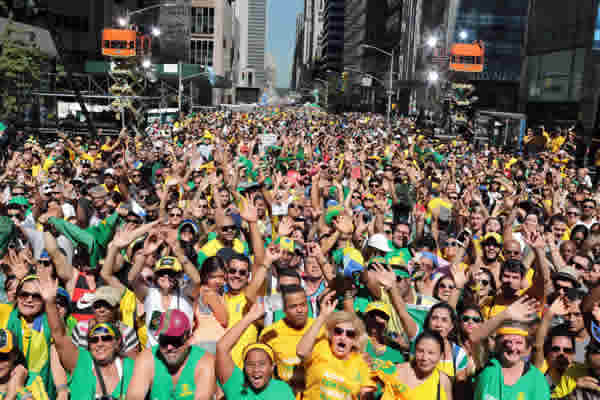