A new feature on Globo’s international catalog, ‘Land of the Strong’ tells the story of love, hate and forgiveness behind an old family secret that could cost many people their lives. 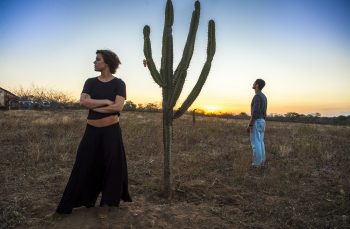 The plot takes place on the fictional Sertão, in Northeastern Brazil. After the young Nonato (Marco Pigossi, ‘Edge of Desire’) disappears, Cassia (Patrícia Pillar, ‘Doomed’) and Maria (Alice Wegmann, ‘Dangerous Liaisons’), mother and daughter, embark on a journey in search of answers in a city where brute force is almost always more powerful than the law.

The super series, which had an average daily reach of 26 million viewers on Globo’s late prime, follows the journey of Maria and her mother. Cassia accepts the help of a judge of dubious morals to look for her son, while the impulsive Maria decides to act on her own and ends up falling in love with Hermano (Gabriel Leone, ‘Hidden Truths’), son of the most powerful man in town and the key suspect in Nonato’s disappearance. The young woman is then forced to set her passion aside and face everything and everyone to unravel the mystery.

“’Land of the Strong’ talks of Brazil, but also of human relations. The twists and turns of the plot are due to the characters’ revelations, who are very complex,” said artistic director José Luiz Villamarim. Most of the super series’ scenes made were shot on location, in the Paraíba outback, in Northeastern Brazil. The team also shot sequences in Piauí and Pernambuco. “The outback is a mythical place, part of Brazil’s foundation. The clash between the archaic and the contemporary permeates the whole story,” said Villamarim.

The series is written by George Moura and Sergio Goldenberg (creators of ‘Doomed’ and ‘The Party’), in collaboration with Flavio Araujo, Mariana Mesquita and Claudia Jouvin, with general direction by Luisa Lima, and direction by Isabella Teixeira and Walter Carvalho (from feature film “Central Station”), who was also in charge of photography.