The magazine seeks the Latin American audience and on its cover it has the stars Isabela Moner, Denise Bidot, Juanpa Zurita, with 22 million followers Marielena Dávila and Franco Noriega on the cover. The generation of young Latinos who make a difference in the digital age 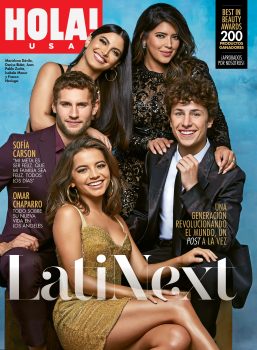 The first ‘LatiNEXT Edition on its October cover publishes a photo of the new generation of Latin media superstars: the’ plus-size’ model Denise Bidot, who is changing the concept of feminine beauty making it more inclusive; actress Isabela Moner, who inspires youngsters with her entrepreneurial spirit; Peruvian chef, singer, model and restaurateur Franco Noriega, who drives to explore passions; actress and singer Marielena Dávila, who promotes corporal positivism; and actor, model and businessman Juanpa Zurita, who promotes his humanitarian agenda with 22 million followers.

This first edition celebrates the prosperous sociocultural group that is the new and powerful generation: young Latinos who were born and grown up in the digital age and for whom technology is their second nature. “The combination of youth, connectivity and digital knowledge has positioned the next generation of powerful Latinos as an obvious force in all areas of their lives,” says Miguel Sirgado, editor of the magazine.

It also includes an interview with Dominican Paola Santana, one of Silicon Valley’s most influential Latinas, founder of the first company in the world to create and use commercial drones for transportation. And charismatic Mexican actor Omar Chaparro, who embarked on the adventure of his life – conquering Hollywood – and his way to it.