After its premiere on Monday, October 7, El Amor más  Grande, the telenovela distributed by Latin Media Corporation, has been positioned among the favorites of the audience in the Dominican Republic placing Colorvisión in second place in the 4 PM time slot.

This story has been able to substantially increase the rating of channel 9 of this country, leaving behind the strong competition of other stations such as Antena 7, Telesistema and Telemicro.

The story of little Onanay, a woman of short stature but with enormous spiritual value has settled in the heart of Dominicans filling their homes with feeling and love towards this woman who every day shows them the sensitivity of a mother.

“It’s incredible how the social networks have been flooded with positive comments popularizing in a massive way this telenovela that is part of the Latin Media catalog, and which has already been sold in Argentina and Ecuador. Likewise, we are in conversations with other countries in the region. I think that with this kind of sales we show that the company’s catalog, in addition to being diverse, is more current than ever for programmers in the region,” commented José Escalante, President of Latin Media Corporation.

Latin Media is a content distributor and will be presenting this drama along with three other novelties in the next edition of MIP Cancun to be held from November 20 to 22 at the Moon Palace in Quintana Roo, Mexico. 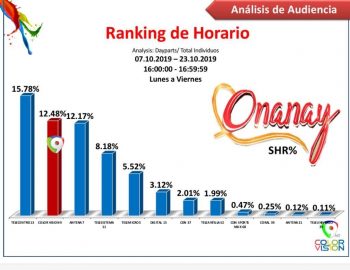