The next event is the Networking Lunch in NATPE on Monday, January 20, 2020.

“After the success achieved in Mexico, during the renowned MIP Cancun 2019 event, the women’s organization of the industry convokes the Networking Lunch at NATPE.” 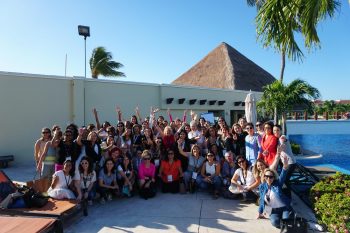 Throughout the world, women’s organizations emerge to energize and promote the growth of women in all aspects that contribute to their reality and opportunity for equality against men, who for centuries have maintained power in civic, business, political, religious, economic and social aspects. With these motivations was born, Worldwide Audiovisual Women Association (WAWA).

The success of the first Business Networking Breakfast on November 22nd in the framework of MIP Cancun 2019, carried out in collaboration with the French group Reed MIDEM, was only the beginning of all the successful activities scheduled for the future of the organization.

Expectations were exceeded thanks to the participation and contribution of each of the WAWA affiliates. María Elena Useche, President of High Hill Entertainment and part of the WAWA Board of Directors, was the host of the event. The opening speech was given by the director of MIPCANCUN Benedicte Touchard. 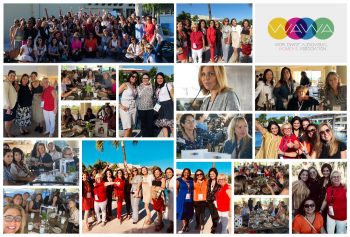 The breakfast was attended by more than 120 executives, distributed in tables of 8 people and each with its respective “Mentoring Leader” with a topic and information on the topic to talk, thus becoming the desired: a space for discussion of new ideas and where they all participated.

These were the Mentoring Leaders and their themes:

Ana Cecilia Alvarado (Vice-President of International Business and New Talent – Ecuavisa) : “Media as catalysts in the transformation of society.”

Carolina Bilbao (Vice President of Programming and Development – Hemisphere) : “Representation of Women in the Current Series.”

Liliam Hernández ( CEO – Universal Cinergia ) : “How the dubbing quality has played a mayor role in the success of digital platforms and all the new form of entertainment?”

Audrey Kamga (Gerente de Ventas – ARTE FRANCE) : “Your mindset and your network: Your best assets for your success.”

Joanna Lombardi (Creative Director and Head of Fiction – Telefónica Media Networks) : “Movistar and the original content as a differential. What are we looking for in Latin America?”

Ana Piñeres and Clara María Ochoa (Producers of CMO Producciones) : “Creative Production, the key to the quality of a production house.”

Roxana Rotundo (CEO – VIP 2000 TV) : “How to reinvent ourselves in the business with all the changes in each of our areas. What to do differently to innovate.”

Milagros Tuccio (Product Manager – Movistar Series and Telefónica Media Networks) : “How to transform a canned into a “live” product? – Strategies for acquiring and generating content around canning.”

Carlota Vieira (Content Sales Manager – SIC) : “The new trend of European fiction production, and in the case of Portugal of the influence of the Latin novela production.”

“Our goal for upcoming events is to continue with this kind of dynamic, to make the networking sessions longer so that more opinions are shared and more recurrent in our markets. Exchanging ideas with executives from other countries enriches our knowledge and our organization,” said Liliam Hernández, President of WAWA who added that “The association has been characterized since its inception to be an association that aims to give a new vision of the business world to today’s woman, the enterprising woman. To this end, our WAWA 2020 Board of Directors: Ana Cecilia Alvarado, Analida López, Blanca Ponce, Cecilia Gómez de la Torre, Emilia Nuccio, Karina Martínez, Liliam Hernández, María Bonaria Fois, María Elena Paniza, María Elena Useche, Offra Elmkies, Roxana Rotundo, Susana Umbert and Vanessa Velázquez, we continue working for the growth of WAWA, with new ideas and challenges.”

The next event is the Networking Lunch at NATPE on Monday, January 20, 2020.