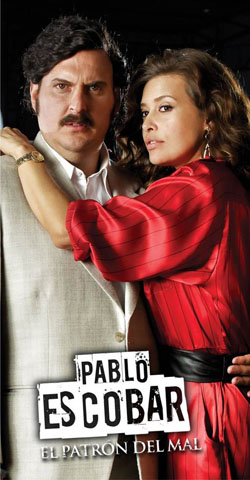 The series Pablo Escobar: “El patrón del mal” is the only Latin title selected as one of the 50 formats that have changed the global TV industry, according to thewit.com, under The (W) it list, issued by MIPTV and MIPCOM communities, well known fairs in this field.

The Wit, Swiss-based agency that studies TV trends worldwide, presents this list, and during the commemoration of its 50th anniversary, will award this distinction to the series Pablo Escobar: “El patrón del mal”, ratifying it as one of the most outstanding productions of recent years. The list includes TV classics like Sesame Street, The Wheel of Fortune, Dallas, Columbo, Star Trek and Jeopardy, milestones in the history of video that will continue to be relevant for generations to come.

The general production was managed by Juana Uribe, Vice-President Caracol TV Network, who accepted the challenge and accomplished a great production that narrates each episode with film optics. The series was shot completely outdoors in 500 locations and with more than 1,500 actors.

“This is the story of Pablo Escobar, narrated with deep respect for his victims, and for those that fought and opposed his destructive power. We tell this story with the ability to envisage history from a distance, in order to illustrate it correctly”, says Uribe.

The Wit had previously referred to this important series as the most commented launch throughout Latin-America’s social networks in 2012, and the first episode, as the second most commented news of the week worldwide.

The titles for each decade will be gradually announced in Facebook during the weeks prior to MIPTV:

To see the Pablo Escobar, the Drug Lord demo, go to:
http://www.caracolinternacional.com/en-us/p/107/pablo-escobar–the-drug-lord