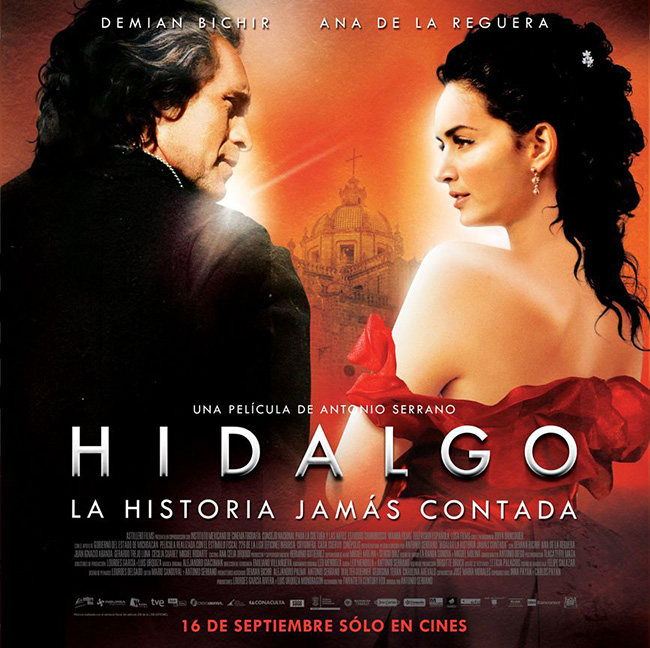 SOMOSTV, the company that produces and distributes ViendoMovies, the commercial free channel that programs films originally produced in Spanish without commercial breaks, announced the licensing of the pay TV rights for the Mexican blockbuster “Hidalgo, la historia jamas contada” (“Hidalgo, the Untold Story”), starring Damian Bichir and Ana de La Reguera. The film won the Colon Silver award in the Huelva Latin American Film Festival and was nominated for several Ariel awards (best actor, best supporting actor and actress, best special effects, best editing, etc.), winning the “best musical score” (Alejandro Giacomán). Directed by Antonio Serrano, “Hidalgo…” narrates the life of the priest Miguel Hidalgo y Costilla and his participation in Mexico’s War of Independence. The movie is part of the collection of films “Los Libertadores” (“The Liberators”) and premiered in Mexico City on September 16, 2010; the day after the bicentennial of the independence of that country. “Hidalgo, la historia jamas contada” was filmed in Guanajuato, San Luis Potosi and Michoacan. In its release date, 500 copies of the film were placed in theaters across Mexico in what was described as one of the biggest releases of all time in terms of number of copies. The story of this Mexican independence hero is told from the point of view of his thoughts from his cell at Chihuahua’s Military Hospital, where he is imprisoned for his independence activities and shortly before his execution. Hidalgo begins to remember moments of his life, including his position as parish priest in the town of San Felipe Torres Mochas where he translated and produced the play “Tartuffe” by Moliere. During this time he fell in love with Josefa Quintana, with whom he had three children, leaving the priesthood for a short time in his life. He also reflects on his education at a Jesuit school, his life as a teacher, his passion for theater, his approach to the indigenous world and his constant fight against the hypocrisy of the time. The film depicts a humanized hero, with his strengths and weaknesses and caused disputes between film critics and historians. With this film ViendoMovies dresses up its screen with a brand new production in the style and quality of today’s Mexican cinema, portraying a beloved figure for all Latin Americans and especially those of Mexican origin. ViendoMovies programs the best films originally produced in Spanish 24 hours without commercial breaks in a culturally relevant on air package and look, supporting the Spanish film industry at all levels: talent, events and festivals. This feature has resulted in a unique bond with viewers and expectations about how the channel evolves in this approach that celebrates the cultural diversity and contributions of Latinos to the American nation