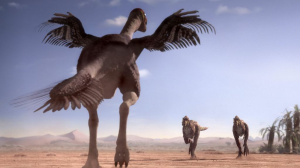 With a dynamic tone accompanied by unique graphics and high technology, the series brings to life the most impressive and amazing creatures of all time and their struggle for survival in six different scenarios: North Africa, China, North America,Madagascar, Europe and South America. Dinosaur Planet showcases the latest in science, geology, palentology and new theories about dinosaurs.

It should be remembered that In 1999, the BBC aired the hit series Walking with Dinosaurs documentary narrated by actor Kenneth Branagh and with it created a new line in documentaries about dinosaurs that instead of basing the footage on interviews with experts, excavations scenes and museums, the episodes were developed on an animal as protagonist and showing daily natural interaction with the environment, their prey, predators and other living things that surround it.

Planeta Dinosaurio airs every Thursday at 20:00 hrs with repeat on Saturdays at 19:00 hrs by the international signal of Once TV.