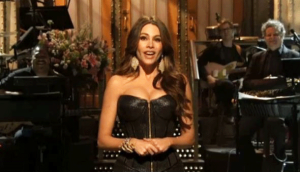 Latin World Entertainment, the talent and production company of Luis Balaguer and the actress herself Sofia Vergara, has become the emerging agency that prevails and wins in the Anglo market. The Colombian star and the highest paid TV actress in U.S. is able to achieve for the second consecutive year obtaining a figure of U.S. $30 million, according to Forbes magazine ranking.

LatinWE currently is responsible for the executive production of Killer Women that starts in January on ABC and in which the actress will possibly have her killer episode.

Sofia is one of the stars of the popular ABC series Modern Family which is in its fifth season and winner of multiple awards.

Second place in this Forbes edition, but far from the Colombian star, is shared by Kaley Cuoco, star of the series ‘The Big Bang Theory’ and Mariska Hargitay, from the series ‘Law & Order’: ‘Special Victims Unit’ with $11 million each.

The list continues with seven other actress and ‘celebrity’ stars, each with revenues of $ 10 million: Tina Fey, Bethenny Frankel, Melissa McCarthy, Ellen Pompeo and the three Kardashian sisters.

Relegated to eleventh and twelfth place are two of the stars of ‘How I Met Your Mother’, Cobie Smulders and Alyson Hannigan, with nine and eight million dollars respectively, ahead of Amy Poehler (13) and Julianna Margulies (14), with seven million.

Three other actresses share the fifteenth place, Lena Dunham, Zooey Deschanel and Courteney Cox, with six million, ahead of Whitney Cummings (18), with 5 million, Mindy Kaling (19), with 4 million and Kerry Washington (20), with 3 million.