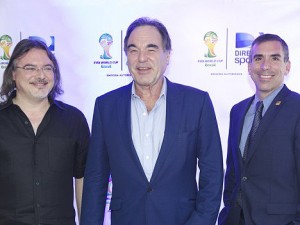 The campaign was conducted in Spain, under the direction of Stone. The announcement was made during the Media Tour held last week in Los Angeles Broadcast Center ( LABC ), the DirecTV broadcast center which emits signal to subscribers of the pay TV operator in the U.S. and HD content for Latin America.

The operator’s goal is to communicate the special coverage that DirecTV  Sports is preparing, less than a year after the start of the championship (in June 2014,)  including full transmission of all matches live and in high definition , as well as opportunity to access exclusive interactive features and complementary programming.

Jagg , VP of Marketing and Communications, DirecTV PanAmericana , said: ‘We found that the best way to capture the FIFA World Cup as a superior experience and pick up the passions that football generates is through the lens of the outstanding and renowned film director Oliver Stone , who has been characterized by a filmography committed , passionate and yet extremely realistic . That a living legend of cinema as Oliver help us translate this into celluloid is the ultimate expression of our vision: to bring to the screen a unique experience.’

Meanwhile, Oliver Stone highlighted: “this campaign proved to be my first experience in a sport as demanding as is football and at its highest level of performance, the World Cup. Working with DirecTV was very helpful and together we managed to get my two roles, as an actor and director, were artistically interesting supported throughout the process.”

The campaign will debut in October in Latin America, with a pitch that will have special focus on digital media, and give more scope for all audiences in the region.

“The talents, the technological innovation with the latest equipment and recognized film professionals that harnessed Oliver Stone’s passion. All this allows us to properly present a campaign to match a unique spectacle like the World Cup,” concludes the executive .