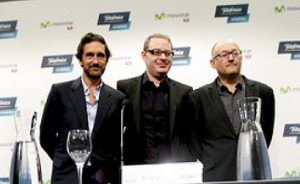 Ignacio Fernandez Vega , Global Contents Director of Telefónica Digital and other directors of the company.

Telefónica Studios to centralize under its brand all company projects and will produce in the next three years 25 quality feature films and television series for its Movistar TV service. The new producer looks to consolidate as a source of quality projects in both European and Latin American markets as in the Anglo-Saxon.

The announcement was made as part of the 61 International Film Festival of San Sebastian, on September 23. Today Telefónica Studios generates an output ranging between ten and twelve films a year, about the same number of projects that generate several major Hollywood studios.

The vocation of film production of Telefónica has been a constant for awhile.  The proof of this is that in the last five years three divisions of the company have produced films and TV series: Telefe, Telefonica Producciones Media Networks and Telefónica España.

Among these projects are successes like El Secreto de Sus Ojos, Las Aventuras de Tadeo Jones and  Un Cuento Chino, all feature films of international significance which have premiered in nearly fifty countries with over 14 million tickets sold worldwide. In addition to having been awarded various international awards: one Oscar, 22 nominations and 4 Goya Awards, 93 nominations and 30 awards Sur y Palmares and the Tribeca Festivals, Valladolid, Rome, Sundance, Sitges and London.

But the new company can not nor want to limit their contributions to enshrined filmmakers and remains engaged as usual in new projects from novel filmmakers and in second and third works of young directors.

As for TV shows, the company, which has participated in the production of “Isabel” , which premieres its second season now, and “Amar en Tiempos Revueltos”, is planning to do series for Telefónica’s pay TV (Movistar TV Movistar and Play) as of 2014 . These series are premium quality, with high production values.

Ignacio Fernandez Vega , Global Contents Director of Telefónica Digital used the presentation of Telefónica Studios Film Festival in San Sebastian, to recall that the company, produces and bring closer to consumers the most attractive movies and series and with the best value-money of the market through Movistar TV and all the added value that consumers now demand – remote recording of programs, personal library generation and consumption on mobile devices.