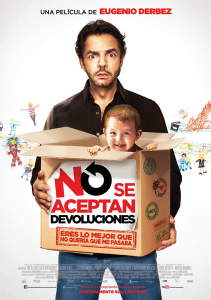 After its premiere on August 30 on American screens and September 20 in Mexico, No se Aceptan Devoluciones succeeded in both countries to be the highest Spanish grossing film in history in its first weekend.

The film written by Guillermo Rios, Leticia Lopez Margalli and Eugenio Derbez and produced by Monica Lozano was seen by 3,361,268 viewers in Mexico in just three days, in 1,550 theaters. The opening the debut of Eugenio Derbez, is now part of the 10 most successful international films in the history of cinema in Mexico, beating “Alice in Wonderland,” “The Amazing Spider-Man,” “Dawn, Part 2,” “Spiderman 3,” “Shrek 4,” “Transformers 3” and “Madagascar 3” to name a few.

In its 4th exhibition weekend in the United States, the film had a box office increase of 17%, rising from 6th to 4th place overall, remaining above “Lee Daniels,” “The Butler” and “We’re the Millers”.

This past weekend, was integrated fifth to the list of the 10 most successful foreign films in the U.S., beating films like “Amelie” (6th place), being very close to reaching “La Vida Bella” (2nd place).