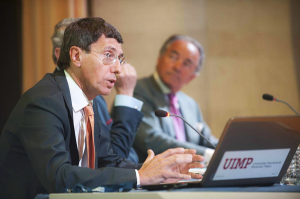 The third largest telecommunications operator in Spain, Orange launched just as we in TVMAS anticipated, the new television service Orange TV, in order to access from any device (TV, tablets, smartphones and PC’s), in its bid for convergent services and the television business, “a business with great potential for growth in Spain”, as explained by the CEO of fixed business of the company, Samuel Muñoz (in Spain pay-tv has a penetration of 27%, compared to 76% in Portugal and 62% in France).

Orange TV is multi-device, high definition (other operators do not offer in the basic package) and comes with a “groundbreaking” price. Specifically, it offers more than 25 premium channels in HD, including the highest-rated series, movies, children , documentaries and international, among which are AXN, Fox Cosmo or Fox. The price: very competitive, 10 euros per month.

The company includes a bonus for mobile data, equivalent to about two hours of broadcasting, as well as service on demand television, videoclub and the possibility to engage additional channels, as one of Disney movies or Canal + Liga.

For this service a la carte, Orange will provide access to contents already emitted by different channels to view when and how often the customer wants. This service covers programming between 7 and 15 days after live broadcast.

With ‘Orange TV’ customers also have access to a video store with premiere movies and the possibility of contracting ‘Disney Movies on Demand’ (5 extra euros) or the soccer channel Canal + Liga (15 extra euros).

In addition, mobile customers who sign ‘Orange TV’ will receive a free mobile traffic bonus (equivalent to about 2 hours of viewing) to enjoy ‘Orange TV’ on their mobile from the 3G or 4G networks.

Orange’s new service is available through fixed operator networks (ADSL, in direct and indirect coverage, and fiber) and mobile (3G and 4G).