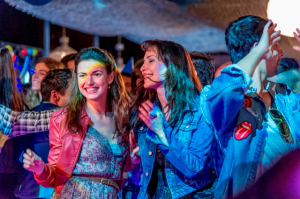 ‘Dancin Days’, a coproduction between Globo and SIC, has reached the end of its run in Portugal with great success. It’s finale aired on September 27 was the episode that had more viewers throughout the telenovela, it obtained 19,2 rating points and a share of 38%, with 1.850 million viewers (source: GFK). The telenovela premiered in June 2012 at primetime on the Portuguese channel and since that time has exceeded all of the results achieved up to the present by national fiction. For more than a year the story of Julia who gives up her daughter to her sister Raquel has led the primetime slot in Portugal and was one of the most viewed programs in the country.

Inspired in the telenovela of the same name by Gilberto Braga and broadcast by Globo with enormous success in the 70’s, ‘Dancin Days’ was watched daily by around 1.4 million viewers in Portugal, achieving an average of 14,5 rating points and a share of 32% (source: GFK).

The Portuguese are big fans of Brazilian telenovelas and for 20 years SIC has been broadcasting Globo productions. Another three telenovelas made by the Brazilian broadcaster are currently airing on the channel: ‘Sangue Bom’ (7 pm), ‘Beloved Life’ (10:44 pm) and ‘Her Battle’ (23:30 pm).

The successful coproduction partnership between Globo and SIC began with ‘Blood Ties’ (2010), which had excellent audience figures and won the 2011 International Emmy Award for Best Telenovela.

Globo is currently coproducing ‘My Dear Handyman’ with Telemundo, which is airing in the United States and Venezuela with good audience indexes. The telenovela inspired on the Globo hit ‘Looks & Essence’ will be taken by the Brazilian channel to the MIPCOM.

At www.globo.com/licensing you will find the trailers, episodes, images, summaries and much more from the 2013 portfolio. You can also download the new Globo Licensing application for tablets in the Apple and Android formats.