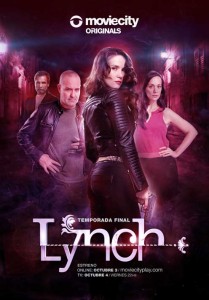 From October 3 to 6, Moviecity, in conjunction with the main Pay TV operators in the region, will open its channels and will be available for all basic subscribers in Latin America to have a “Free pass” to the best releases and series its 6 exclusive channels: Moviecity Premieres, Moviecity Hollywood, Moviecity Action, Moviecity Family, Moviecity Mundo and Moviecity Classics.

As plus, Moviecity offer subscribers the ability to watch the premiere of “Lynch – Final Season” on October 4. The dark miniseries starring Natalia Oreiro will have this season, international talent in its ending.

Some of the titles that will offer viewers across the region over the four days through its six channels are: El Legado Bourne, The Expendables 2, The Hobbit, Ted, Batalla Naval, Ghost Rider: Espiritu de Venganza, Blanca Nieves y el Cazador, La Era de Hielo 4, ParaNorman y Espejito, among others.