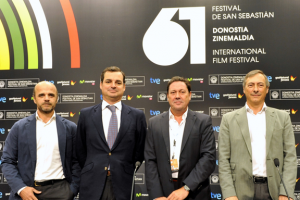 Within the framework of the latest San Sebastian Festival were revealed details of the Spanish film industry by the producers. And seemed more like an announcement festival on all types of contents and not a film festival. Poor in auspices, stars and contents. No more brightness from decades past. The good?: the denunciation of the situation and demanding Government for urgent measures to implement the new financing model and tax incentives, on thin ice despite the promises of a year ago.

The numbers are devastating. José Antonio Félez himself, in charge of giving the bad news from the producers’ association, said: ” We would like to show other figures, but it is important to know the pulse of our industry.”

“In 2013, the provisions of the National Statistics Institute are even worse, an interannual decrease, to July, of 20.8%” lamented Félez. (Félez appeared alongside the new president of the Confederation FAPAE, Joxe Portela) and the concern on the faces of the producers’ representatives was more than evident .

In terms of revenue so far this year, Spanish films have suffered a decline of seven million euros compared to 2012 (20% less) and 1.4 million viewers less than the same period last year. Hence things do not remain there. 92 film shoots have been reported compared to 129 last year (28.7% less). A worrisome data: film budgets have suffered a decline almost tragic. More than half of the 65 productions last year were smaller than one million euros, 30.5% between one and two million and 16.3% two million. Of those 65 Feature films, there were only 15 over two million and only eight over four million.

The good news is that international sales of audiovisual products have experienced a significant rise .

The market share is stable, at a dismal 11.3% (the same as last year at this time), but at the expense of what happens in the last quarter, as the share at the end of 2012 reached 17.9%  thanks to the blockbusters that saved the face of the industry; Lo Imposible, by Juan Antonio Bayona, and Las Aventuras de Tadeo Jones, Enrique Gato.

In the absence of what titles can do as Las Brujas de Zugaramurdi, by Alex de la Iglesia, Grand Piano, Eugenio Mira, or Futbolin, Juan José Campanella, among others, today there are two Spanish productions leading the ranking of the films seen: La Gran Familia      Española, directed by Daniel Sánchez Arévalo (€1.7 million raised since its release 15 days ago), and Justin y la Espada de Valor, animated film by Manuel Sicilia, with 600,000 euros in a week.

And these are not the only problems of Spanish cinema, with year after year reductions in state aid in the Fondo Nacional de la Cinematografía (National Film Fund.)

The paralysis in the working mixed comission charged with working to sell and negotiate a new business model for industry funding –  was announced in San Sebastián  just a year ago and established a timetable that must end with a new law in force in January 2014 – has created an uneasiness difficult to bear.

Portela demanded to the government to rule. “We need to know whether or not there is political will to implement this new model because the technical work is done. No deadlines have been met and we are in a moment of absolute urgency.”

Not to mention the cultural VAT of 21% since last year, when countries such as France have announced that from next January 1 tax on cinema tickets will be reduced from the current 7% to 5%.

Portela assured that it did not seemed that the VAT in Spain will undergo any modifications, at least in this last quarter. “What  seems likely is that it can enter into the package of changes to taxation that the government is preparing for 2014, but it is only an impression.”

The details are cold but reality, not. As an example, the II Europe-Latin America Coproduction Forum that has been held in San Sebastian, and in which Spanish investor participation has been minimal. “Before it was the Spanish who helped Latin American productions. Now they are those who come to our aid,” ensured the filmmaker Ana Diez, present at the forum.

Ojos Cerrados, the most dramatic of this situation is the unemployment and the amount of people who have already thrown in the towel. “It’s an industry that has created a lot of jobs and wealth. Now we are trapped by the situation, but this is the same that is living all over the country.”

Antonio de la Torre, another of Spanish cinema names present at this event, explains : “In Spanish cinema we are beginning to migrate as in other sectors. I just filmed in France and I am considering the possibility of working in English. It is the dismemberment of an industry,”  explained yesterday the actor of Canibal and La Gran Familia Española.

The Malaga interpreter points two intitiatives to take radically: “You have to make a film policy, and that includes VAT, as does France, and the second is that we need to radically change the Spanish mentality against piracy. Barcena’s spirit possesses us.”

The figures denote a path to the precipice

Invoicing of Spanish cinema has suffered a decline of 15% in 2012, the first year in which the government raised the VAT that supported the cultural show tickets up to 21% (the measure came into effect on September 1).

The collapse had a direct impact on job losses in the sector: they have lost 12% over the previous year .

The only positive data registered in 2012 came from abroad, where Spanish film sales grew by 19.9%.

The current exercise maintains this raw trend. The collection so far this year assumes a decline of 20% (seven million euros less than in the same period from 2012).

The audience also has declined: 1.4 million viewers less than 2012.

Budgets also drop. More than half of the 65 productions of 2012 had a budget of less than one million euros.

A profound work is expected in other festivals like the San Sebastian producers did.

If there is something positive and mover in any industry, is honest information.