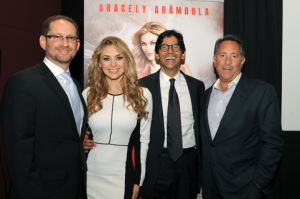 Telemundo International announced yesterday at a press conference at MIPCOM 2013 in Cannes, France, which the recognized actress Aracely Arambula, will star in the new telenovela based in the great classic story of Victor Hugo, Les Miserables, to be produced by Telemundo in 2014. Valentina Parraga, the acclaimed writer responsible for the successful production of Telemundo, La Reina del Sur and La Patrona is in charge of the adaptation of this new production of Telemundo Studios.

Following the success obtained by Arámbula with her major role in La Patrona, in which she played Gabriela Suarez, a woman who seeks to do justice to those who took away the most precious thing in his life – story that evokes the famous novel The Count of Montecristo – the Mexican actress returns with another high-level production, which will become the first Spanish telenovela based on the French epic drama.

“We are very proud, because this is another great production that will carry our seal and we anticipate having excellent ratings,” said Marcos Santana, president of Telemundo Internacional. “Telemundo is the only Spanish speaking corporation who leads this type of originals proposals within the framework of melodrama for the international markets,” added Santana.

Valentina Párraga was the writer who adapted the story of La Patrona, the telenovela that took possession of first place in the 9pm schedule on Telemundo, as well as the powerful action drama La Reina del Sur, an original of the Spanish Arturo Perez-Reverte. Both telenovelas beat their English competition regularly and marked record highs for both Telemundo Spanish televisions in the United States, and in its international broadcasting.

“This adaptation of Les Miserables is already in pre-production and will be shot entirely in Mexico, so that the story will have exteriors that only this country can provide,” said Joshua Mintz, Executive VP of Programming Fiction and General Manager of Telemundo Studios. “Soon we will be announcing the names of the actors and actresses that will complement the casting, as well as directors, producers and the rest of the team that will integrate this stellar production” Mintz added.

Aracely Arambula, had a special participation in this conference during MIPCOM 2013, where international media shared her experience as the lead in La Patrona, the satisfaction provided by this role and the major challenge which now assumes with Les Miserables.

With the same scenic force that distinguishes this actress, Aracely will give life to another courageous woman who has to resist and hide to prove her innocence to her family and her pursuer who can not hate because of the nobility of her heart, all in the midst in a modern context that provides current social situations where as the epic work of Victor Hugo, draws on social injustice and the eternal struggle between good and evil.