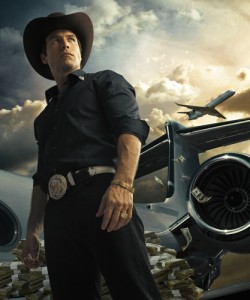 The success of El Señor de los Cielos came to Bolivia. The stellar production of Telemundo last week through the Unitel channel in the 9pm schedule. The telenovela-series starring Rafael Amaya describes the life of Aurelio Casillas, the leader of a drug cartel in the 90’s which aims to dethrone Pablo Escobar and become the most powerful man in Mexico and the United States.

Telemundo’s original story co-produced with Caracol TV set records in the United States, exceeding the 27% share of the audience in Spanish-speaking population, as well as becoming one of the three highest-rated programs of Telemundo’s history, surpassing even all the English networks, belonging to the audience range 18-34 years.

The questions of the Bolivian-loving public of these great stories and faithful followers of this genre are when can we see a telenovela with its own identity that also can be exported and to sell Bolivia as an epicenter of beautiful landscapes, natural locations and local and creative abilities own production? Surely with the support of international production houses and major distributors.

In TVMAS we are always provoking these initiatives and with tools such as the World Summit of the Telenovela and Fiction Series Industry can surely be achieved. Or that local producers in Bolivia see a large space to recreate a lovely love story. With all the history of this wonderful country, it would be a matter of creativity, initiative and investment.