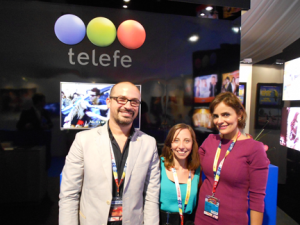 As part of the fair MIPCOM 2013, Telefe announced that two of its contents, the telenovela “Resistiré”  and the unitary belonging to the cycle “Historias de Corazon” will be adapted to the territories of the Middle East and North Africa by producer Beelink. ”Historias de Corazon” is a unitary program with 30 chapters and starring a rotating cast. Renowned actors in each chapter will touch on distinct topics related to love, passion, friendship, emotions, tenderness and the strenght of value and the struggle to defend them. “Resistiré” is one of the most successful telenovelas of Telefe that mixes intrigue, suspense and a great love story and marked a new stage in the genre.

After having made the adaptations, Telefe will be the international distributor of the same. This company is the largest contents producer in Argentina and a worldwide reference to the completion of proprietary content as a service to third parties; at a national or international level.

The international business division is one of the most important programming distributors to the world with a presence on every continent, the programs are translated into more than 35 languages ​​and distributed in more than 100 countries. Beelink is a production and distribution company based in the city of Dubai, United Arab Emirates. The latest Beelink hit drama series was entitled “Game of Death” broadcast during the 2013 season of Ramadan, in the larger Middle East channels. Beelink commissioned Endemol Middle East the production of the hit talent show “Star Academy” which began airing last September on CBC and LBC channels. Moreover, Beelink acquired several “Latin telenovelas and Arabic entertainment programs” and distributed them to Middle East channels.