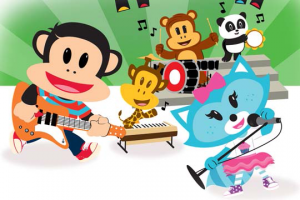 “Julius Jr.” ​​(26 x 22 or 52 x 11) relates the adventures of an inventive and dreamer monkey who has a team to make his wildest imaginations become reality. Meanwhile, “Digimon Fusion” (30 x 30) tells the story of a digital world beyond the known, where powerful creatures vie for supremacy; but the fate of the Digital World will be threatened, and the Digimon will turn to humans for help.

In “Power Rangers Megaforce & Super Megaforce” (40 x 30 + 2 specials) the heroes must battle the merciless Vekar ​​Prince, who has returned with his army of aliens to conquer Earth. To help them in their mission, Gosei will give special powers to the Rangers that will transform them in the Super Megaforce Rangers. Moreover, “Nicky Deuce” (1 x 70) tells the story of Nicholas Borelli II, an overprotected teenager having the adventure of his life when his plans to attend a math camp go wrong and is forced to spend the summer in Brooklyn with the family he never knew he had.

Finally, “1 Chance 2 Dance” (1 x 90) an aspiring dancer 17 years old moves to a small high school in Los Angeles in mid- semester of her senior year. Her heart is torn between two guys and she will have one last chance to realize her dream of becoming a dancer.