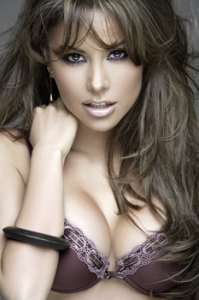 The actress and singer Gaby Ramirez, is excited since it will start recordings of the series, an adaptation of “El Mariachi” it would be planned initially for a total of 70 chapters, spoken in Spanish transmitted in Latin America by the Sony Entertainment Television signal.

This series will provide a unique combination of romance and high-stakes action; it will be shot in Mexico with wonderful locations and having as main characters Martha Higadera, Ivan Arana and Gaby Ramirez as the antagonist.

Gaby gives life to “Candelaria” a woman working at a nightclub that has love ties with the protagonist of this story, being a victim of her charm; addressing drug trafficking issues, human trafficking, smuggling and social problems that are experienced every day in our environment.

The actress and singer is also in recordings of the series “Jenny” Jenny Rivera (R.I.P.); Gaby, on many occasions had the opportunity to share and invite her to the “Estudio 2” program the now deceased singer. This series will air soon on Estrella TV Los Angeles.

The singer and conductor, promotes in the United States el corrido “No me Importa” of the “Komander” group, the theme of her next record material that will be the regional Mexican genre.