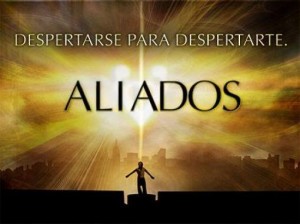 The creator of Cris Morena Group, famous for fiction for teens turned into successful as “Chiquitas”, “Casi Angeles”, “Rebelde Way” and “Floricienta” said in the presentation that offered along with his son Thomas Yankelevich, director of global content Telefe that, “from any point of view ‘Aliados’ is the language of the new era” and affirms that this is the first Spanish-language fiction emerges as a cross-platform format.

“For me ‘Aliados’ is a fictional story, but it represents the history of humanity and the future of communication,” he said.

Regardless of the particular history of this fiction about seven beings of light that are sent by the “great creator ” to join six humans to try to save the world from imminent destruction, “Aliados” is imposed on the market by being an innovative proposal.

“This project is absolutely breaking. It is a reality of something non-traditional,” said Thomas Yankelevich, son of Cris, who attended the launch along with Gonzalo Fiure, Chief of Contents Fox International Latin America.

It is a format where each chapter is broadcast on television (Telefe Wednesday and Thursday on Fox) as a unitary and then, during the week, the program’s page provides ‘webisodes’ of seven minutes to go pounding what will happen in the next episode.

In addition, through social networks remain permanently connected to the public in constant interaction with the story.

It premiered last June 10 and marked the return of Cris Morena to the entertainment world after the death of her daughter Romina in September 2010, currently airs in 18 countries and some of the figures have impressive impact.

Twitter – The weekly series is “trending topic” in Argentina and in the world. During the first month of broadcasting, “Aliados” was mentioned more than 620,000 times per 160,000 people through various bird social networks.