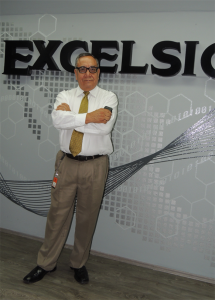 In Mexico, Multimedia Image Group (GIMM) announced the start of Excelsior TV broadcasts from September 2. This new project, led by experienced and respected journalist Felix Cortes Camarillo, will broadcast for 365 days a year, 24 hours a day without interruption, by Cablevision channel 127 and Sky, in 27.2 digital televisions. In addition to webcasts: www.excelsior.com.mx/tv.

In an interview with TVMAS, Felix Cortes, director of Excelsior TV, said how important it is to have real experts at the forefront of the news, to differentiate newsreaders.

“The idea of ​​expanding Grupo Imagen with an informative media is not new. 8 years ago we acquired the Excelsior newspaper and launched Cadena 3, but wanted to grow in informative television, we had to take advantage of a whole infrastructure in technical resources, editorial and put in a channel 24 hours a day to expand our offer. The challenge to start this channel is that it stands out from the other information channels’ tender. The news is the same for all media, the only difference is the immediacy, who and what is said. We’re betting to translate sections of the newspaper to television and especially readers are not the ones leading the programming, but real journalists, they themselves assemble each division’s content such as sports, finance, society etc.” said Cortes Camarillo.

He also stressed the importance of creating multi-platform contents to be updated. “Every time there’s more and more reporters on the street, the share of social networking has come to change all media, there are many people out there that says all that is going on. It’s a very important moment that is taking the news industry. Our proposal is cross-platform, only in our portal we have more than 40 000 impacts and our social networks are fed information continuously.” the journalist ended.