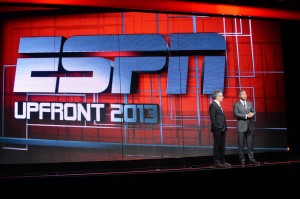 ESPN held its UpFront in Mexico City, where in company with customers; business partners, executives and talent of the signal, as well as media, the brand offerings for 2014 were announced. TVMAS was part of the presentation where ESPN stressed the cross-platform brand offers and the continued digital growth, as well as plans for World Cup coverage.

In terms of content and programming, ESPN unveiled its plans in anticipation of the 2014 World Cup which includes an extensive special programming, as well as original content that revolves around the stories of great interest about the world of football. These include the following:

Destino Football: A 16-episode documentary series dedicated to discovering the sport most provocative stories. Destino Brazil: Rumbo a Brazil, the analysis before and after the game dedicated to the World Cup qualifiers will be transmitted at the time of qualifying for the FIFA, along with the latest news and analysis from CONCACAF, CONMEBOL, UEFA Confederations and the Mexican team. Capitales de Futbol:  Brazil. The renowned documentary series that profiles the most popular football cities in the world with a special that highlights three major cities that will host the World Cup. SportsCenter especial de la Copa Mundial: Special editions of SportsCenter daily during the World Cup.

Among the novelties, the company introduced ESPN Sync, the first Spanish-language web application, second screen, which complements the experience of watching live sporting events while supporting programs ESPN news and information before, during and after the events through a second dynamic display. The new platform also provides opportunities for integration advertising with features ideal to better promote brands, products and services.

During UpFront, ESPN also highlighted programming bids including the Mexican Soccer League matches with the games live of Santos and Cruz Azul, UEFA Champions League, UEFA Europa League, German League-Bundesliga, Italian Serie A, La Liga Portuguesa, the Liga Argentina, the Brazilian Championship and American leagues like the NFL, MLB, NBA and top flight football in the United States the MLS. In addition to this ESPN emphasized that it is the home of the Grand Slams (Australian Open, Roland Garros, U.S. Open and Wimbledon) and exclusive Golf tournaments like PGA Championship, PGA Tour.