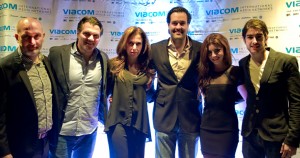 Viacom held in Mexico, DF its Upfront 2014, where they introduced the new programming for its 2014 global brands, MTV, Nickelodeon and Comedy Central. The company confirmed over 1200 hours of programming combined with a glocal (global-local) focus which includes international blockbusters, local productions, events and original television formats.

“We proudly present for 2014 a strong combination of the best international programming Viacom international and local productions that will continue to keep us as leaders in front of our audiences and are ideal for integrated commercial content. Our significant investment in more local productions in Mexico is a great step that we aspire to leave a footprint in the entertainment in this high growth market,” said Eduardo Lebrija, Senior Vice President and General Manager VIMN the Americas – Mexico.

Among its signals, MTV stands out, presents a grid for 2014 including original programming, series and important events. The music is still at the forefront of the MTV screen with the production of the 5th annual international MTV World Stage concert in Mexico and a new production of MTV Unplugged.

It also confirms the production of their 5th original novel called Alma Mater. The original series premieres hit of MTV United States as Awkward the realityPlain Jane, the second season of the docu-reality Catfish and local production of the same in Mexico, the series ratings leader Ridiculousness, well -known titles as the fifth season of The Vampire Diaries and the series Tomorrow People, The 100 and The Originals. The 2014 offer also includes successful award shows like the live broadcast of the MTV Video Music Awards, MTV Movie Awards, MTV EMA and local production for the second year of the new MTV Latin America awards, MTV Millennial Awards. Plus integrated content formats and capsules MTV Güik, among others.

Meanwhile, Nickelodeon confirmed more original content for 2014 with the development of four pilots: La Cocina de Thalia, Que Chance Tengo Yo, Mision Indigo and Danny Who, as well as the fourth edition of the Kids’ Choice Awards Mexico as well as the Sam & Cat series, Wendell & Vinnie, HauntedHathaway’s, See Dad Run, How to Rock, The Thundermans and Every Witch Way and the return of the iconic children’s favorite series Teenage Mutant Ninja Turtles. Also new animations like Monster vs Aliens, Rabbids Invasion and Get Blake.

Comedy Central, celebrates its second year in Latin America and confirms 2014 production shows new releases of Stand- Up comedy, a show of bloopers and behind the successful debut Roast format in Latin America, Comedy Central reconfirms this local production for 2014. Also the premiere international series such as The Michael J. Fox Show and The Goldbergs, the return of Viacom International programs like The Exes and Happily Divorced 2, plus new seasons ofTosh.0, Men at Work and South Park, among others.

In the digital world, RedViacom, digital sales division incorporating exclusive television content of Viacom with digital brands to reach premium audiences, The Nickelodeon channel will launch the Nick app for iPad, this application includes short-form videos of original sketches, comic fragments and sketches, behind the scenes, clips and photos of stars of Nick and animated characters, as well as surveys and children’s games. The network also announced development for Nickelodeon Slime Cup, an innovative digital format that allows fans in the region to support their favorite teams composed of the renowned Nick series as iCarly, BTR, Ninja Turtles and Sanjay & Craig, among other in interactive football competition to celebrate the 2014 World Cup.