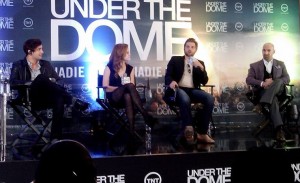 Mike Vogel, Rachelle Lefevre and Dean Norris at the launch of Under the dome en Latin America

With the acquisition of the broadcast rights for pay TV of the series Under the Dome of CBS Studios International, TNT began broadcasting in Latin America the hit series based on the novel by suspense master Stephen King. This television adaptation developed by Brian K. Vaughan (Lost) and produced by CBS Television Studios in association with Amblin Television, began broadcasting since last November 4, on Mondays at 10p.m. (ARG/ CAN/ MEX/ CH/ PAN/ ECU) / 8p.m. (PE) / 9p.m. (CR / GUA) / 9.30p.m. (VEN).

Broadcast in the U.S. on CBS, Under the Dome averaged 14.5 million viewers, according to figures released by Nielsen. Thanks to its enormous success in the U.S. market, it has already been confirmed a second season of the show, the first episode will be scripted by Stephen King himself. TNT has secured the broadcasting rights to pay TV in Latin America in both seasons.

“With the acquisition of broadcasting rights of Under the Dome we assure to our screen one of the most recent successes of the American television industry. A story of great quality, engaging plot and the hallmark of Stephen King, they will take the series to transcend the genre fans to call for all audiences”, Cesar Mariano, VP and general manager of TNT Latin America.

Meanwhile, Mike Vogel, star of the series, highlighted to TVMAS the importance to bring to all markets quality contents regardless of language. “It’s important to do the crossover in TV with productions that can match the movies. We’re Living a golden age where the big players are betting on quality contents that also have a window in TV,” concluded the actor.

The story … At exactly 11:44 a.m. on October 21, suddenly and inexplicably, a small town in the U.S. is isolated from the rest of the world by a mysterious, invisible force field. The authorities and the people try to discover the secret behind the dome, while they will be faced with their own fears and problems.