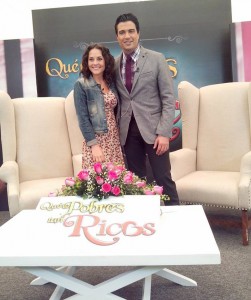 Jaime Camil and Zuria Vega, protagonists of the melodrama

The producer presented her new work for Televisa, Que Pobres tan Ricos, a telenovela based on the Colombian story Pobres Rico, a Juan Manuel Caceres, Hector Alejandro Moncada and Lliliana Guzman original, under the adaptation of Pedro Armando Rodriguez, Alejandra Romero Meza and Humberto Robles, which initiates transmissions from November 11 in prime time on El canal de las Estrellas. TVMAS was part of the media presentation in Mexico City, where it unveiled the cast and production team of this story that will have 240 half-hour episodes.

“It’s a story that we have been working for more than a year. Now we already finally went into the air and we are betting for a family comedy on a timetable that I have much affection,” said Ocampo.

Considering the decline of audience that has registered the prime time of El Canal de las Estrellas, the producer stressed to TVMAS the importance to continue betting for contents of family touch. “Currently there is a huge offer of the Networks that are aimed to certain target and its contents to this audience, but Televisa remains a company that wagers to bring together the whole family with its contents. The rating it is logical that with the multiple digital offers is divided, but we remain the company that generates the highest rated content and that focuses on bringing together all kinds of audiences,” concluded Ocampo.

Qué pobres tan ricos, stars Jaime Camil, Zuria Vega and Mark Tacher, the stage direction is provided by Benjamin Cann. The telenovela will be shot entirely in Mexico City and begins broadcasting on November 11 at 8:30 in the evening by El Canal de las Estrellas. The U.S. broadcast through Univision will be next December 2.