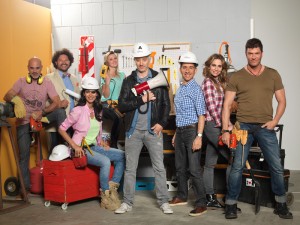 The signal Infinity, owned by Turner, along with Endemol, presents this second installment of the Latin American version of EXTREME MAKEOVER HOME EDITION, the award winning reality show and managed to rebuild homes in the region with a commitment to bring a new reality to families that inhabit them.

This second season has 10 chapters completed: 8 in Argentina and 2 in Chile. Each episode had an investment of nearly half a million dollars. Such has been the success of the format, which has also been made in the U.S., Spain, Turkey and Norway, scoring high rating numbers.

In each episode, the hosts and the construction team will travel in a motor home to a geographical location which held the transforming action, and from there will present to the audience the context and the inspiring life stories of the protagonists. To carry out, in addition to the contributions of the hosts, the show will have a professional team of design and construction, hundreds of workers and neighbors heading volunteers from each community who donate their time and effort to meet the challenge and achieve complete restoration of every house in record time.

EXTREME MAKEOVER HOME EDITION LATIN AMERICA is transmitted from November 16, every Saturday on Infinito and simultaneous on TNT with repeats on Sunday.