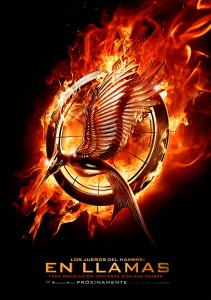 The second installment of the eponymous trilogy, written by American, Suzanne Collins, was released last weekend in the U.S. on its fist day grossing U.S. $ 25.3 million as reported by distributor Lionsgate. This amount exceeds 28% more than the revenue from the previous installment, The Hunger Games, this being predicted by the rate of advance sale of The Hunger Games: Catching Fire.

Unlike other big releases it is worth mentioning that the Christopher Nolan film, The Dark Knight: the Legend Reborn grossed U.S. $ 30.6 million, while Iron Man 3 grossed U.S. $ 15.6 million in its premiere last May.

While its international run, the film opened in 43 territories in which it is estimated has raised $ 32 million, reaching double in some countries the revenue from the original movie. Throughout the weekend the film will open in 65 other territories, including UK, Australia, Germany, China, Russia, Mexico and Spain.