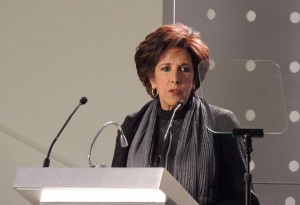 Enriqueta Cabrera, Director of Canal Once

Before a large group of guests from the cultural, academic and artistic fields, as well as media, where TVMAS was present, took place the presentation of the new image and programming of Canal Once in the Soumaya Museum in Mexico City. With a moving presentation led by journalists Adriana Pérez and Javier Solórzano Canedo, the director of the station, Enriqueta Cabrera announced that the station takes the name of Canal Once, National Polytechnic Institute that all of Mexico knows and identifies from long ago.

“We return to Canal Once, which is the name adopted in 1959, but especially in the collective imagination of the first public television station in the country. Currently Canal Once in Mexico is the broader public broadcaster, as its signal reaches almost 70% of the national population in open TV and over five hundred companies distribute their TV signal at home and abroad,” said Enriqueta Cabrera, director of Canal Once.

During the event, it was emphasized the transformation that the Canal has acquired over time, and that during these 54 years experience, the programming stands out for its quality, innovation and values in production, which has been recognized with several international awards.

In this regard, Enriqueta Cabrera said that Canal Once has innovated genres and formats, as is currently the pioneer and largest producer of drama series on public television in Latin America, as this year more than 65% of its budget was destined for the production of contents.

“Production is not an expense; it’s an investment that nourishes. Canal Once is always aware and places importance on destination of resources. We are returning to the public the money we receive as a public entity through the screen, providing quality products,” she concluded.