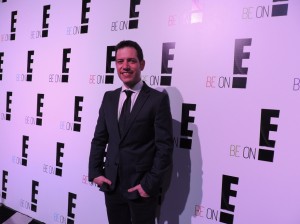 With a showcase held in Mexico City , E! Entertainment Networks Mexico presented some of their latest products for 2014, highlighting the brand new musical series Wake up! with no make up, co-produced by Coca-Cola, Warner Chappell and Once Loops for Latin America .

This being the first scripted series of channel E! worldwide, TVMAS spoke with Jorge Murillo, country manager for Mexico and Central America , about the foray of the channel in this kind of contents and projects for 2014.

“Wake up! is the idea of producer Sebastian Mellino and Coca-Cola, when the project was generated they invited us to co-produce with Warner Chapell to create this series and we loved the idea. E! Entertainment is the only entertainment channel in Latin America with productions dedicated to this and this is a musical project, a spectacle for a teen public that we want to add up to our audience. To develop original contents in Latin America very regionalized, is one of our most important strategies we have had, and this production includes talent from various countries thus allowing for a more pan-regional transmission. Precisely by seeking different pathways you can be successful on television. Our audience grows and at the same time brings new eyes attached to the music, and that motivates us to get out of a comfort zone or certain contents,” said the executive.

On the importance of producing regionalized contents, Murillo highlighted: “The audience likes to see their country’s talent succeeding in international productions, it becomes aspirational. Is key to give the seal of the region, a clear example is Fashion Police that has generated much controversy, good or bad but I think we have the license to talk about fashion and entertainment.”

“This year was the most successful of the channel by the number of hours that we produced, 500 on average. Commercially, was the strongest in the past 15 years. The makeover has been well received; we took a more fashionista touch.” concluded the executive.

It should be noted that for 2014, the channel will premier the series: El Incorrecto and Day after Experience. In addition, to new seasons of La Sopa and Fashion Police, among others.