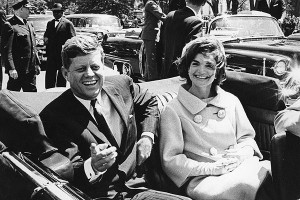 The Pay TV signal presentes in weekend prime time, three special premieres that will remember John Fitzgerald Kennedy, the thirty-fifth President of the United States, who was killed a November 22, 1963, when circulating in the  presidential limousine along Dealey Plaza in Dallas, Texas.

Special programming begins on Saturday November 23 with The Unpublished Kennedy Films, unreleased to the public by the Kennedy clan at different times of life films. Thanks to these amazing home movies in 16mm and color, the viewer will discover little-known details of the clan, between 1935 and the oath of office of President Kennedy in January 1961.

It continues immediately with the premiere of JFK Assassination: Undisclosed Secrets, reflected through one of the largest surveys which have been carried in American history to probe for the people who was the murderer of JFK. With the data revealed by the investigation itself several conspiracy theories that delve into this special were analyzed. HISTORY commemoration concludes on Saturday November 30th with OSWALD: 48 HOURS BEFORE DYING, a documentary that really try to uncover who was Lee Harvey Oswald, the murderer of President Kennedy.