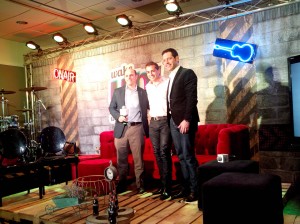 The musical series of 13 episodes of 30-minutes produced for Latin America is the result of the partnership between these two industry giants next to Warner Chapell in the musical part as well as Once Loops in the production. TVMAS was part of the presentation of the cast and production team in Mexico, where they stressed the desire to invest in quality content for teens with language suitable for the audience.

“Coca-Cola has historically opted for music: in its commercials, in concerts and live experiences, and now in the production of this series for young people. Wake up! with no make up. Will seek that all young people in Latin America will vibrate with the energy within to sing and dance in front of their screen connected to Coca- Cola TV. With this historic alliance, we remain committed to content for our audience with double window choice the 13 chapters to be transmitted through Coca- Cola TV, as well as the international signal for E!” said Ulises Ramirez, Director of IMC (Integrated Marketing Communication) for Coca-Cola Mexico.

Significantly, the idea of ​​the series was developed by Sebastian Mellino, musician, producer, musical director who has been involved in Latin American Idol, Operacion Triunfo, Violetta and more, along with his partner “Darta” Sarmiento, who has worked with artists such as Soda Stereo, Los Autenticos Decadentes, Diego Torres, Christian Castro and Marc Anthony, among others. This time, they bring their experience as writers, musicians, producers and vocal coaches to Wake up with no make up! Inclusively the cast is talent of the singing Academy of Sebastian Mellino.

Wake up! with no make up Is transmitted from November 20 on demand via the online channel Coca-Cola TV, and daily by E! Networks Latin America.