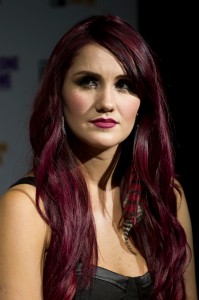 As part of the International Day for the fight against AIDS, the past November 30 were carried out around the world seven simultaneous events in different countries to raise funds and celebrate the launch of the global initiative  #SomeoneLikeMe, a global campaign to inform and create conversation among young people about sex, sexual health and ultimately achieve a generation free of HIV. Mexican singer Dulce Maria joined MTV and Sico at an event in Mexico with the participation of international DJ Benjamin Diamond and other celebrities with great influence in social networks.

Among the activities for the launch of the campaign, aired on MTV screen the documentary #SomeOneLikeMe simultaneously in 7 countries to spread the message of the campaign and invite young people to join, which was not only lived in Mexico city, but also in cities like Bogota, Sydney, Shanghai, Singapore, Moscow and Berlin.

Someone Like Me is being released through digital and global channels, targeting younger audiences in which they connect and socialize. MTV SAF and Sico®, launched someonelikeme.tv where you can find great content about sex, sexual health and sexual education. This web site allows young people not only learn, but to be part of the global conversation, upload content, share photos and experiences.