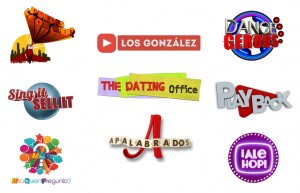 In addition to the formats created by the productions of Televisa in Mexico, the business unit under the name Televisa International currently has 11 formats in its catalog. The newest of these, go through the various genres of entertainment: the talent show, game show, dating, hidden cameras and varieties are represented in order to entertain and reach all audiences.

Among them, the most prominent is the production on Channel 5 of Televisa’s Everybody and Their Brother format, transformed in the successful program ¿Puedes con cien?, wherein a group of 100 people acting as one enjoy hidden camera pranks to a funny  gallery victims. The format has been optioned in 25 territories and will be produced shortly in other territories.

Of the past wagers, have been especially successful Los Gonzalez and Sing it, Sell it, both also humor formats: the first, a sitcom in which the characters jump into the street to play pranks with a hidden camera and the second the first show that links auction and talent in an explosive mix of sales and curious songs. To these original bets are added, among other things, the dates from The Dating Office (a dating hidden camera in the office which will soon have a pilot in the U.S.), Dancegerous (a comic dance show that will have Peruvian adaptation), Apalabrados (a quiz show that brings to the screen the successful app of game and words) and Playback (one talent in which, for the first time, the art is to deceive the judges).

Televisa International through the “Joint Venture” with Televisa with La Competencia (The Spanish Ratpack, S.L.) they work already the next concepts to be presented in the next festivals. The goal: To position Televisa once again at the forefront of the entertainment formats.